The Federal Budget – a Focus on Tax, Infrastructure, Regulation and Manufacturing

The Budget was handed down on 6 October.

The broad nature of the document is by now well known:  the Government has total current liabilities of 1.6 trillion dollars[1] with real GDP to fall by 3.75% in calendar year 2020[2], and total gross debt projected to stabilise at around 55% of GDP in the medium term.[3]

Much of the government focus (and expenditure) will be on the rejigged Jobkeeper and Jobseeker   as well as the new Jobmaker subsidy scheme to keep employees and employers either liquid or connected.

The Government talks of a broad Jobmaker plan although for the most part the plan is a disparate mix of traditional proposals offered up by the Departments, and not a plan per se.

Increased consumer and business confidence, encouraged by tax cuts and business incentives are instead relied on to establish the road to recovery.

The tax cuts are supposed to work like this:[4] 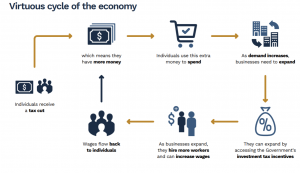 The tax cuts are aimed towards the lower income brackets who are perceived to be more likely to spend the additional money rather than save it. The Government must be hoping that this occurs.

Equally, it must hope that the proposed tax incentives for business ranging from temporary full expensing  to fully maintaining the research and development tax incentive will encourage original investment in productivity enhancing capital made on the basis of servicing increased demand and not just bringing forward scheduled investments, noting that the Reserve Bank has found that at business investment was weak even before the onset of COVID-19.

The three P’s -productivity, participation in population – have always been the elements driving the Australian economy.

Participation is supressed as a function of the recession, whilst migration – the driver of GDP increases overall (if not for per capita GDP) is expected to fall to 0.2% in 2020-21 and 0.4% in 2021-22, with net overseas migration expected to be negative over this period for the first time since 1946 and the slowest in a century.[5]

With limited international movement of people, the population driver of growth may not be available for a little while.

Infrastructure development is designated to carry a lot of the heavy lifting. Between $100 – $110 billion dollars proposed to be spent over the next ten years.[6]

As impressive as this sounds, that is a proposed spend over the life of three and a third parliaments or two and a half forward estimates periods.

The Opposition has argued that the Government has underspent  $1.7 in the last financial year and $6.8 billion across the entirety of the Coalition’s term of government.

There is also $1.5 billion to be spent on a Local Roads and Community Infrastructure Programme on a ‘use it or lose it’ basis.

Let’s hope that being spent wisely on projects that can improve productivity and are not just on boondoggles: the ‘use it or lose it’ model was one the reasons we got the school halls fiasco during the previous government.

Finally, it is to be hoped that promises of an infrastructure led recovery is not frustrated by construction industry capacity constraints.

As KPMG has indicated:

Australia already has record levels of investment in infrastructure, so to expect the market to double down on that and provide even more is problematic. Finding capacity for further projects without taking it away from building the current long term strategic assets already underway could be challenging. As will finding a way to do this that avoids creating unintended demand spikes that put greater pressure on budgets, or a one-off spike that causes a boom and bust cycle.

There are some itty and bitty regulatory reforms laced through the Budget. Some things such as, for instance, reducing the number of forms new child care service providers have to fill out from two forms to one are helpful, but not economy reforming.

Everything seems to be left to the process being coordinated by the Council on Federal Financial Relations announced earlier in October, although an allocation of $261 million for national competition payments for competition and productivity enhancing reform[7] suggests that something may be in the offing this financial year.

At around the same time the government has also announced its Modern Manufacturing Policy, identifying sixseparate areas of focus: resources technology, food and beverages, medical products, recycling and clean energy, defence and space.

The narrow focus may disappoint  some industry sectors, although the policy does promise:

We are considering how Commonwealth procurement can build local manufacturing, including for Australia’s manufacturers, in line with international obligations.[8]

although that said it will be interesting to see how much the Government is prepared to change procurement policy, given a general lack of appetite for reform the last time it was considered by government and on 5 May 2019 acceded to the World Trade Organization Agreement on Government Procurement.

Whilst allowing for a degree of preference to benefit small and medium enterprises the overall aim is to encourage open competition for government contracts.

It will therefore be interesting to see (when the time comes) how far decision makers are prepared to go to interpret the amplitude of Australia’s international obligations when deciding how to ‘build’ Australian manufacturing.

We have to hope that happens.