From COAG to National Cabinet – Will the New Structure Work?

The first step was to propose a number of procedural changes to the Premiers Conference itself, with the intention to reduce its ad hoc nature, and to allow consideration of options and greater preparation prior to the meetings, rather than jurisdictions receiving information literally the night before meetings, as happened on some occasions.

The COAG process then evolved to pursue the objectives of:

However, since then the COAG structure has ossified to the point where the structure is one ‘where good ideas go to die’.

Now that much of the initial disruption of COVID has died down and the ‘Team Australia’ approach commences to splinter it is important to see how the new structure will ordinarily operate.

As Colin Barnett, the former Premier of Western Australia said in a recent article:

Neither the COAG nor the National Cabinet hold any constitutional or legislative powers. They are simply a meeting of a prime minister in the state premiers. They are not a level of government, yet interest groups talk openly about lobbying them.

My experience of the COAG was that the way it worked very much depended on the attitude of the prime minister of the day. I expect the national cabinet will be the same.

This is the new structure: 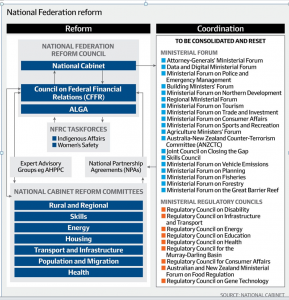 How ministers ‘can come together to solve issues without requiring bureaucratic structures’ is one of the matters to be considered by the COAG structure review referred to in a previous post.

The proposed new structure needs to be calibrated properly. As you can see from the graphic, there’s still a lot of moving parts, irrespective of whether a ‘consolidation and reset’ of ministerial councils and forums is actually achieved.

In our view, one thing that must change is the very bureaucratic process set out in the Handbook for COAG Council Secretariats – A best practice guide which significantly delegates significant powers (particularly the power to program agendas) to senior officers.

In our experience, it is this structure which gives rise to the inertia that doomed to the current COAG concept.

More generally, the questions that will need to be resolved include:

Perhaps we will find out more once the Conran Review reports.

One final question – does the Council of Federal Financial Relations have too much power in the revised process?

This is something discussed in the final post of this series.